The Legend of Paul Buchanan and the Church Gap 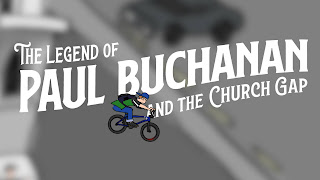 The Legend of Paul Buchanan and the Church Gap
I wrote some words about this story over on Pinkbike, but I'll include them here too.
Paul probably wouldn't like being the center of attention in this cartoon. Sadly I can't be sure. There's no easy way to talk about Paul Buchanan without addressing the excruciating depression that overwhelmed him and ended with him taking his own life. Working on this project, I spent hours and hours thinking about him, remembering what a genius he was on a bike, and feeling heartbroken that I'd lost touch with him through the years.
But this goofy cartoon I made is not a sad story. Thinking about Paul Buchanan also means remembering how pioneering, creative, inspiring, and just plain burly he was on a bike. Someone whispered a tall-tale-like version of this story to me a few years after it happened. I remember my feeling of incredulity. The "Church Gap" was a big deal. I couldn't wrap my head around someone attempting one of the biggest challenges on a bike and not bothering to capture it on film or video. The next time I saw Paul, still flustered with disbelief, I asked him about it. He calmly told me, "I just wanted to see what it felt like."
Sandy Carson was with Paul that day and was kind enough to tell the story. Since there is no footage, I did some animation. Paul might not like being the center of attention, but I miss the guy and wanted to share this small moment of his greatness.