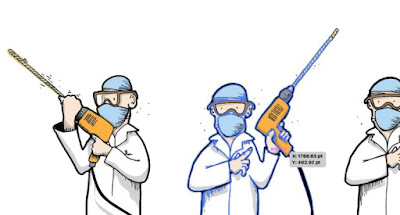 When I headed to college in 1991 I was enamored with the idea of using computers to animate and create art. However, the university I landed at had an art department that told me computers and art could never mix... that the combo was an "oxymoron". After a semester I left college to follow my BMX career and refocused all my creative energy into bike riding leaving behind the idea of being an animator.

Eventually (like 25 years later) the idea of animating popped back into my head. I had no idea how to do it, but I figured I could make it work. At Fairdale Bikes I was immersed in photoshop and illustrator and had figured out a sketching style that was easy for me. I found an "animate" feature in photoshop, made a short test animation that seemed to work and so I dove in!

Mat Hoffman is an old friend who in my mind is basically a real-life superhero. The experiences he has and the stories he can tell are simply amazing. He was kind enough to sit down with me via Skype and tell the one about his Lars Ligament surgery with no anesthesia. I screen recorded the Skype calls and on the other end Mat recorded his audio to his phone. It isn't the best quality audio and I learned that I should have invested in a microphone. Still, it worked out.

I ended up with two different Skype sessions totaling over 2 hours. Job #1 was cutting that down. It was my first time editing audio and I hadn't really considered that challenge. Trying to shorten the story and get it down to the basics was important to me because I knew I couldn't animate a 60 minute story!

Once I finally got the audio track in place I just started drawing. I hand drew everything, then scanned in each frame and drew in color via illustrator with a wacom tablet. Then I'd take those frames and drop them into photoshop to make frame animations. It took me a long time because I was figuring it all out as I went but the great part was that the drawings and the story had me laughing to myself during the entire production. The story and the drawings were just so ridiculous.

I'd never suggest that this is the best animation you'll see; the drawings are sloppy, the frame-rate is low and the whole thing is kind of clunky. Still, I more-or-less managed to pull it off. ESPN put the video on to their site and paid me well for it (thanks!) and I did manage to accomplish animating something. I used a brute force approach (dive in, figure it out as I go) to create this but that seemed appropriate when talking about Mat since he's famous for figuring things out the hard way! Hopefully you'll get a laugh from the cartoon...